Known as China’s “National Liquor”, Kweichow Moutai Baijiu is unequivocally the most recognised liquor beverage in China and around the globe. Its recognition was most prominent in 1972 when Chinese Premier Zhou Enlai used the liquor to entertain US President Richard Nixon in China. In 1979 during an unrelated occasion, Henry Kissinger reportedly said to Deng Xiaoping on his visit,  “I think if we drink enough Moutai we can solve anything” – referring to US-Chinese diplomatic relations (Macdonald, 2012).

Since its glorious moments in history, Kweichow Moutai has risen to become a prestigious iconic liquor for various special events and occasions including cultural, business, political and military events. From a personal standpoint, Moutai not only symbolises status in one’s social standing or represents wealth but also signifies friendship, respect and trust when forging relationships during business meetings.

To put its dominance on the spotlight, In 2018, Moutai’s sales revenue reached 73.6 billion yuan. The surge in the products popularity and high demand has resulted in large scale production of counterfeit bottles, which occurs more frequently across Asia. Therefore, consumers need to be more vigilant when buying such expensive liquor products from suspicious stores.

In the following illustrations, we will briefly explain what to look out for when purchasing from unauthorised retailers or dealers. We will draw upon a genuine Moutai Flying Fairy (2020 bottle) as a guiding example. Please note, you can purchase the latest bottles available via our online store: Baijiu Australia shop). 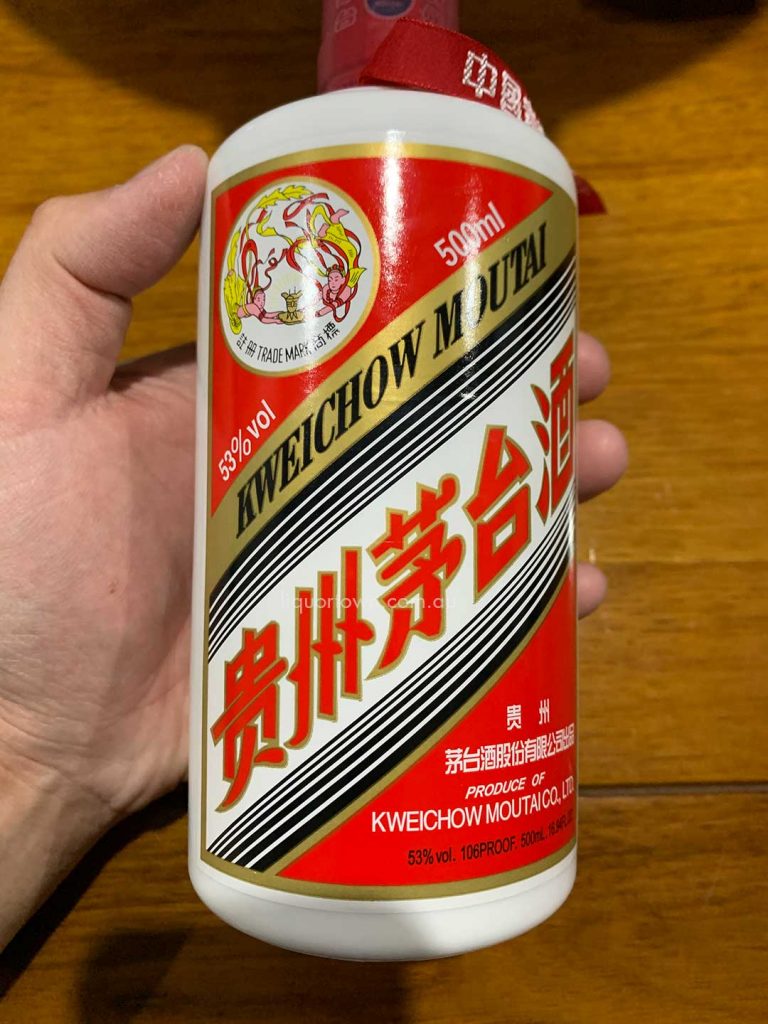 Front label of the Kweichow Flying Fairy bottle should appear as pictured. Trademark of the two fairies is relatively unique and distinctive in relation to the characters, font and colour. Two red ribbons accompanying the bottle featuring chinese characters should look fairy consistent and smooth stitching with respect to the characters and alignment. 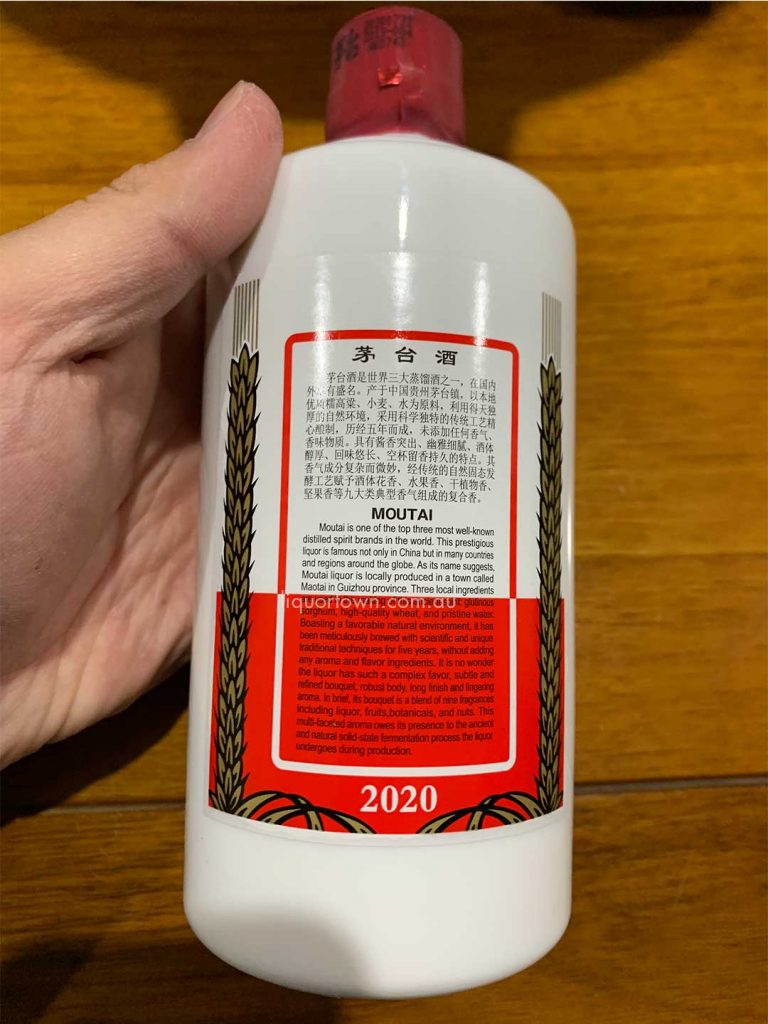 The back label of the Kweichow Flying Fairy bottle is presented with written chinese and english words. Font characters is meticulous, well structured with no grammar mistakes. Bottom of the label will encompass the bottling year.. in this case, Year 2020 as pictured. Bear in mind, this bottle is the international export version which features english words, whilst the chinese domestic version only has chinese characters on the back label. 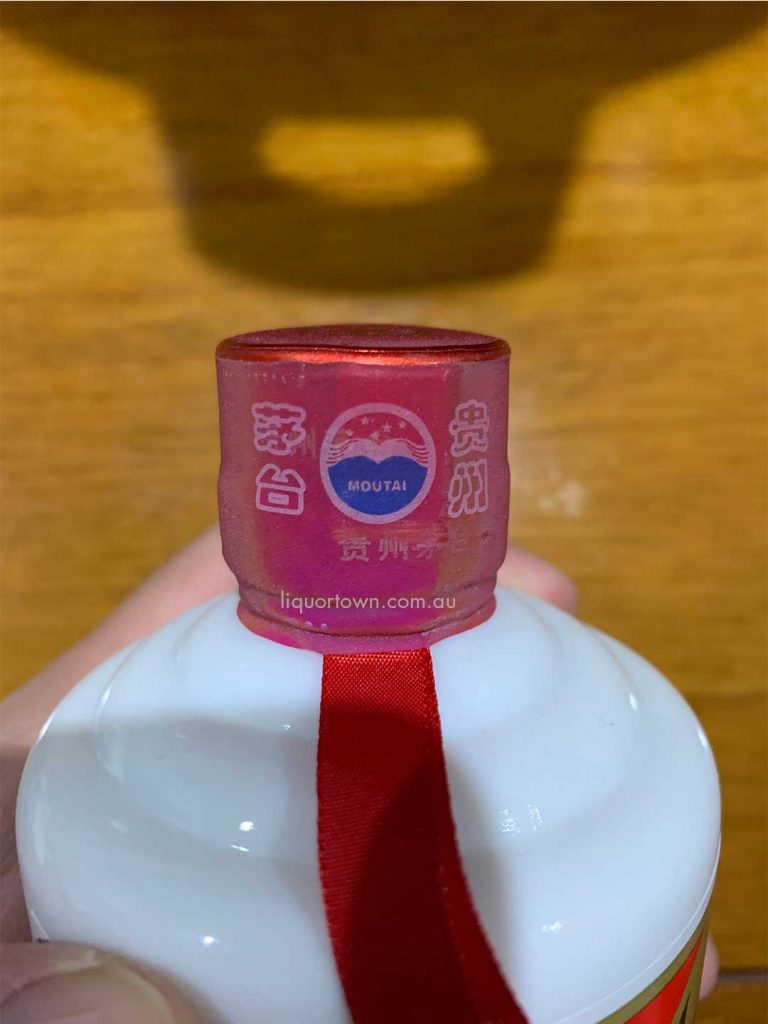 The cap is secured with a red seal. This seal contains the Moutai logo and when moving the bottle around in projected light, there is a holographic light wave encompassing english characters with the word ‘Moutai’ and chinese characters. If there is no holographic feature or the seal is simply plain red then its likely a fake bottle. 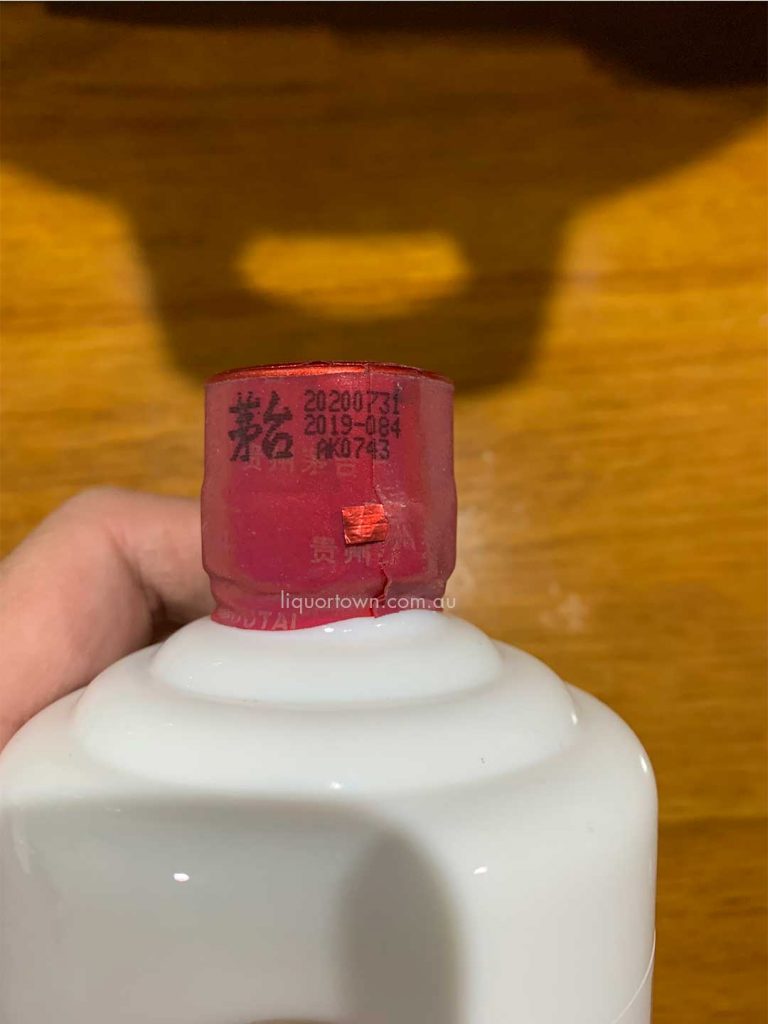 Back of the red sealed cap features chinese characters along with production / bottling dates and a unique identifier. There is a distinctive light black square stamp on the top right side of the date. On the outset, a square string allows the seal to be released in one smooth action when pulled anti-clockwise. 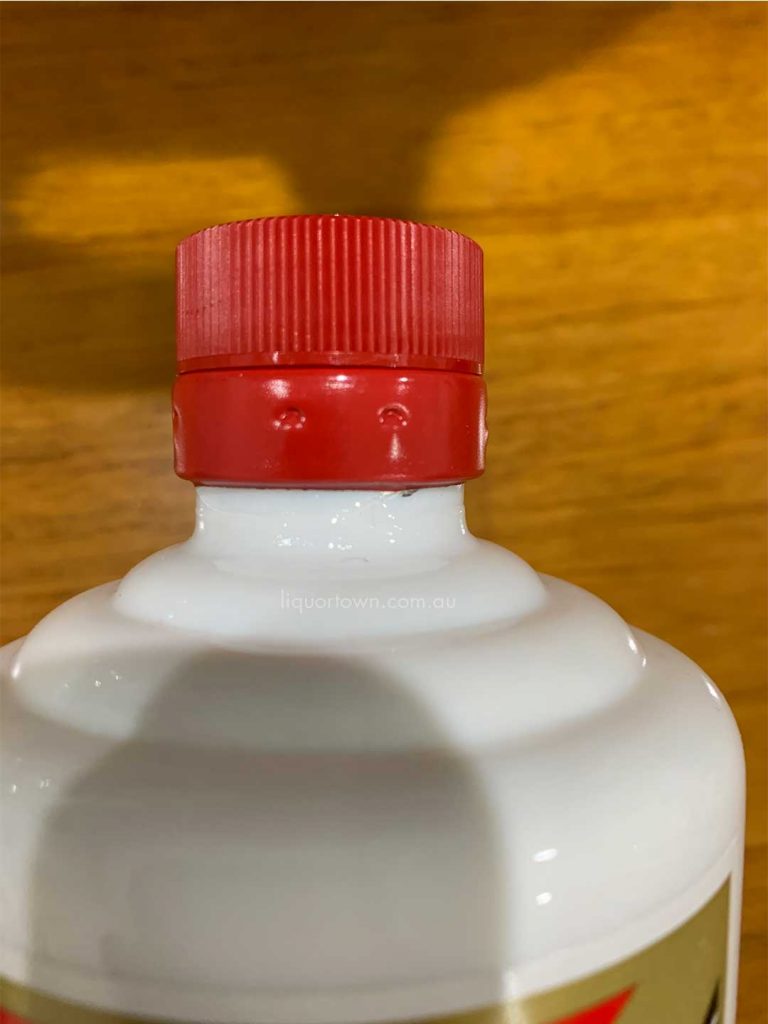 Upon removing the red seal, the cap/lid appears like this. 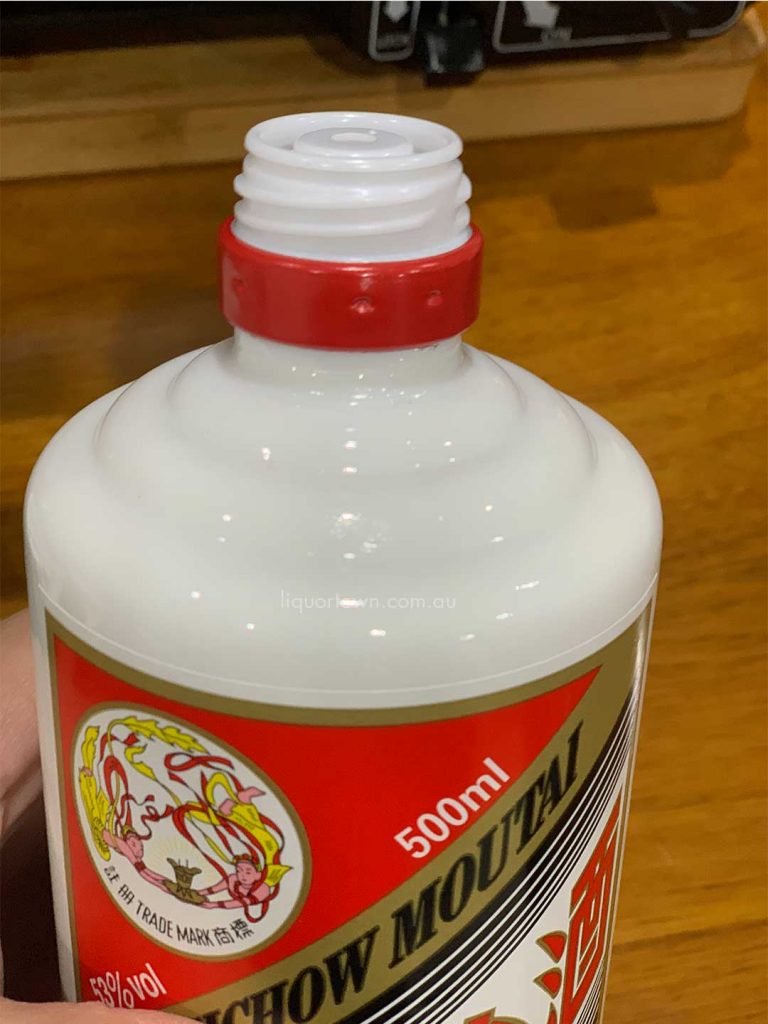 The red ring is a solid fixture to the bottom of the opened bottle. There should be no movement. 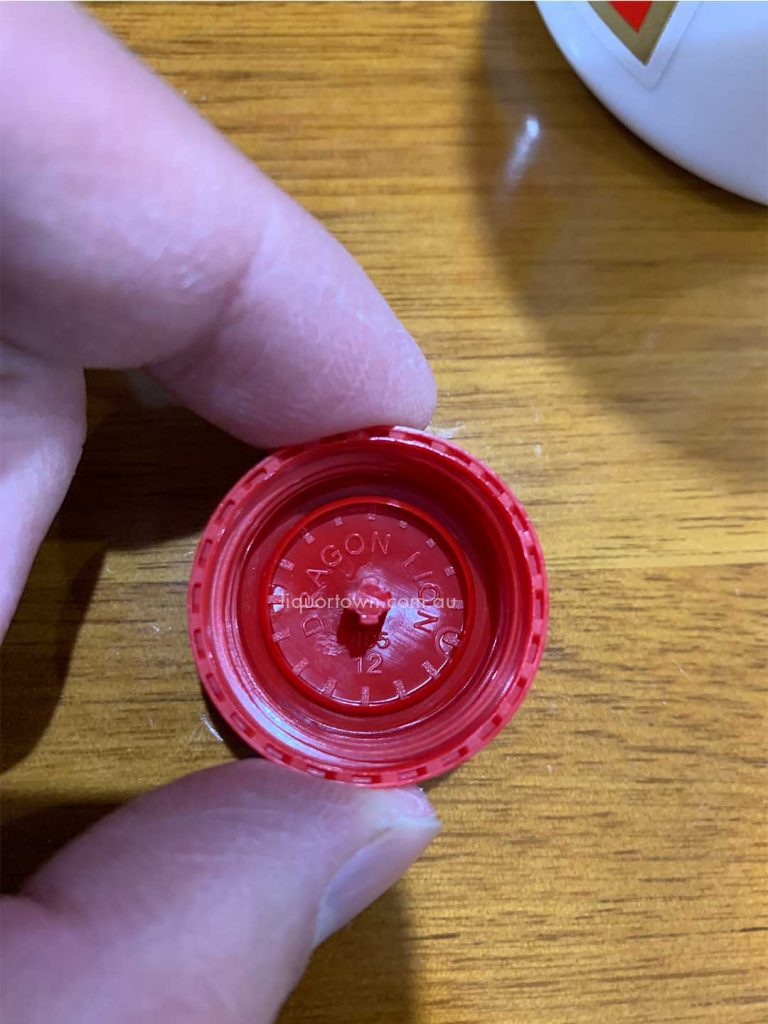 Inside of the red cap, there is english printed text “Dragon Lion” followed by a number. Note the particular outlines and patterns with perfect alignment. 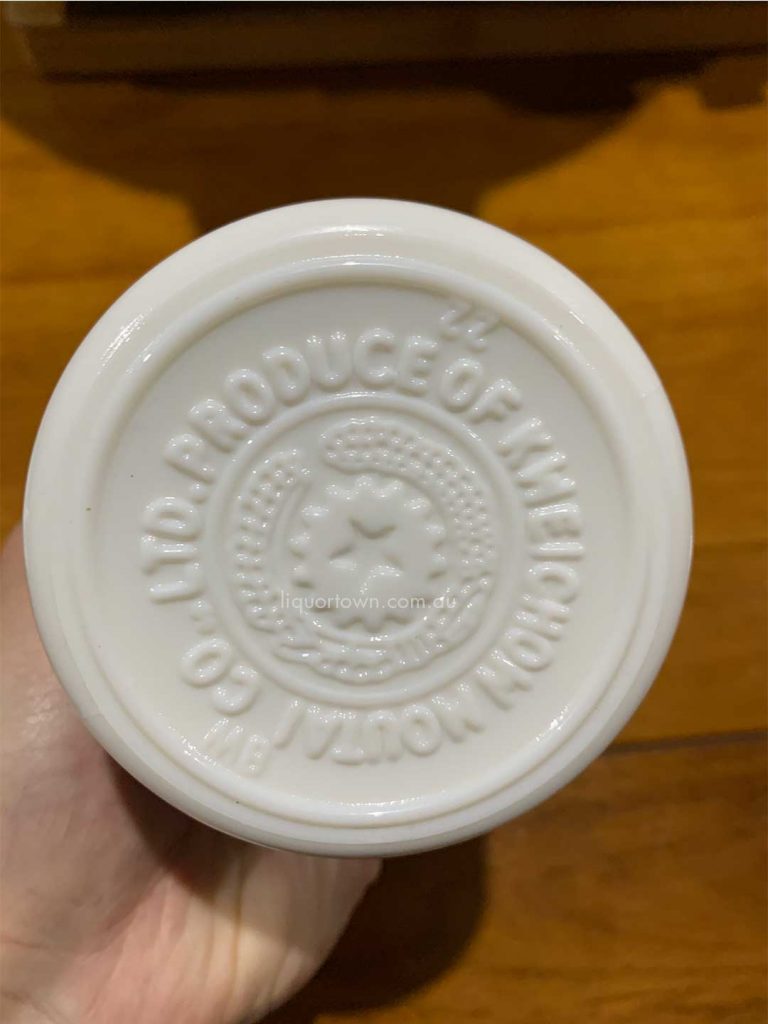 Bottom of the bottle, there is printed english words in the centre circle “Produce of Kweichow Moutai Co ., Ltd.” There is also a floral pattern with a star emblem in the middle. Just on the outside of the text, there are two english initials followed by numerals on the other end. 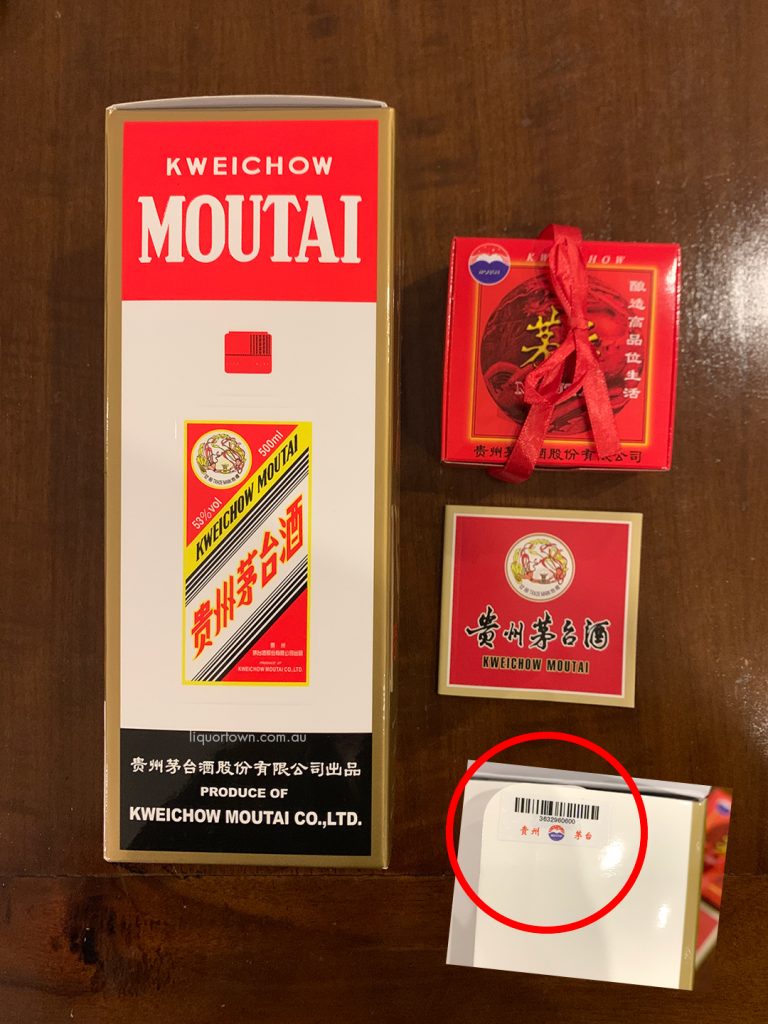 Pictured is the Moutai Flying Fairy box (international / export version). It always contains an inner gift box with a slightly loose ribbon. Within this box, there are two moutai miniature shot cups. This box also contains a booklet with a history and background of Moutai in written English. There is ALWAYS a unique serial identifier and bar code sticker as pictured with holographic features. This is generally situated within the inner top flap of the box or back of the actual bottle. 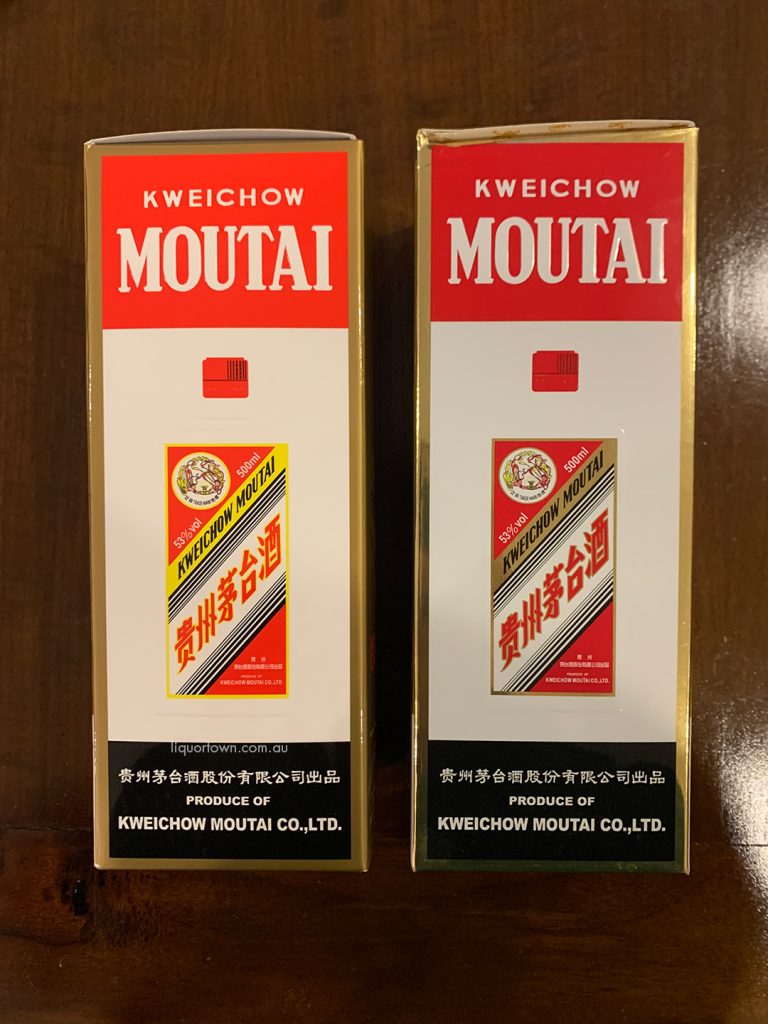 Confused? as mentioned, the illustrations in this post is the export version for the international market such as Australia, US and Europe. The box is distinctive based on the bottle image encompassing a yellow outer edge with yellow highlight running across the printed words “Kweichow Moutai”.

Pictured on the right is the domestic/national release (only for China and Asia). This has a gold outer edge and gold highlight running across the printed text “Kweichow Moutai”. Generally, the same serial components and unique identifier is affixed on the back of the bottle. A inner gift box with two glasses is always included, however does not include a printed English booklet.

Are these measures guaranteed to assist with authenticating genuine bottles?

No. But they do provide general guidelines and examples on how to examine and inspect Flying Fairy bottles when purchasing from questionable or suspicious stores.

Criminal syndicates, particularly transnational organised crime groups go to great extent to produce fraudulent counterfeit products to appear as “the real mccoy”. This is no different to high valued consumables and luxury goods such as Rolex Watches or LV handbags who are susceptible to “fakes”.

The ONLY way to guarantee its authenticity is to purchase from authorised stockists/resellers such as Liquor Town. In Australia, you can visit the official Moutai Distributor website who provide a list of sellers.. that way you can shop with confidence!

Important announcement: All orders made will be processed and shipped from Monday 11 July 2022. Dismiss